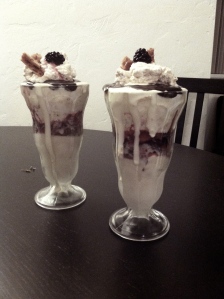 This is the first food blog type post I’ve ever made, and I’ve learned quite a lot. I was planning on doing step by step photos, but that won’t be possible because a) there’s not enough light in my kitchen, b) my camera is not good enough, c) I don’t have enough hands or a tripod. So we’ll have to stick with the (bad) glamour shots for now. 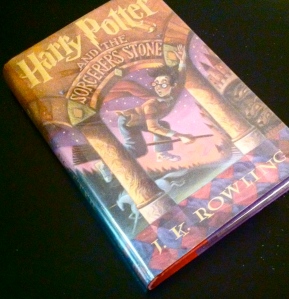 This first recipe comes from Harry Potter and the Sorcerer’s Stone. We’re starting with the Harry Potter series because it’s one of my favorites, and it happens to be a banned/challenged book and we’re coming to the end of banned book week. Knickerbocker Glory is mentioned pretty early on in the book, when Harry accompanies the Dursley family to the zoo to celebrate Dudley’s birthday:

I won’t go too much into the role that food plays in the Harry Potter books in this post; I’ll save that until the end of the series (we’re doing all seven books), and then I’ll write up a discussion about food in the Harry Potter books. However, I will say that in this paragraph food helps to reveal the temperaments of the whole Dursley family, but in ways that have already been established by the narrative. We know that Dudley is a spoiled, over-indulged child, that Vernon and Petunia are unwilling to both see what they’re doing to both of the boys, and that Harry is continually given the short end of the stick, but taking all he can get. The one dessert allows a very tangible display of this entire family dynamic. 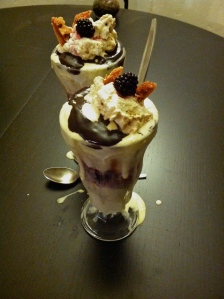 But now, to dessert! This recipe is quite an undertaking as I prepared it today. If you are not a masochist, have far less time than I do, or don’t feel like making parts of this dish than by all means don’t. It would be very easy to use store bought ice cream, hot fudge, caramel or dulce de leche, and so on. This dessert will still feel very special and is dinner party ready, even if you don’t make everything from scratch.

I did this all in one swoop, but if you are having people over for dinner, you’ll probably want to prepare some of this in advance. You really can prepare all of it in advance (up to 2 or 3 days)  except for the whipped cream and the chocolate sauce, and just assemble it right before serving. This is enough for about four servings.

This was my improvised creation that turned out quite yummy, but you could also add dried fruit, or make it an adult treat by adding brandy or rum (though your ice cream won’t get quite as hard). Orange Curd

Chocolate Sauce (feel free to use store bought fudge or chocolate sauce, but something nicer than Hershey’s) 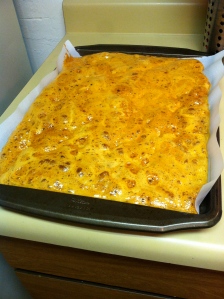 Honeycomb candy after you put it into the tray, it will lose some volume as it cools.

Make the honeycomb candy (if you can only make one thing from scratch, I recommend doing this, because it’s just so much fun)

Tips: Having everything ready and within reach before you begin is vital before making candies. You won’t have time to do things after the syrup starts to heat up, or it will certainly burn. Prepare the ice cream base (don’t forget to freeze your ice cream insert the night before if you need to do that for your machine):

whip up the pudding 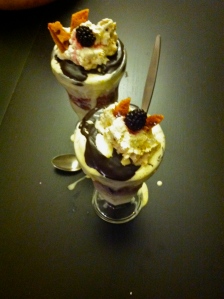 Variations: If you’re using ready-made ice cream, experiment with the flavors of fall and use butter pecan, cinnamon, or pumpkin ice cream. You can use seasonal fruits like apples and pears instead of the berries and keep the sauces and toppings the same.

Make a tropical version (this could easily be dairy free) with coconut and mango ice creams, sesame candy, and different sauces.

One thought on “Baking For Bookworms: Knickerbocker Glory from Harry Potter and the Sorcerer’s Stone”