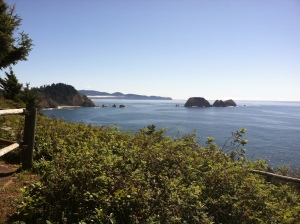 The view from the Cape Meares lighthouse path

If you’ve never been to the Oregon coast, you’re missing out. With beautiful beaches and charming oceanside towns, the coastline is beautiful, surrounded by state parks, good camping, and friendly people. This post focuses on the northern section of coastline from Astoria to just below Tillamook.

This was compiled on my family’s week long trip to the beach in the beginning of September, but since my aunt went to Seaside this weekend with her husband (and the quills from Monday came from this trip), it was on the brain.

Here are my top five activities for your next trip to the northern coast, from the most northern to the most southern. This range is still a pretty short drive, less than two hours in all and easily broken up: 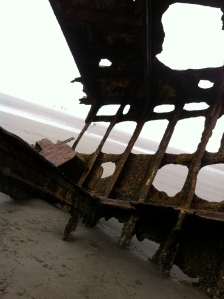 On November 13, 1906, the Peter Iredale ran aground just south of Astoria. All the crew were rescued, but part of the ship still remains. A gorgeous place to soak up history and take some great pictures (not to mention play pirate). 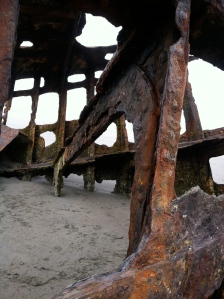 You can learn more about the wreck from the Oregon History Project and more about Fort Steven’s here from the Parks and Recreation Dept. 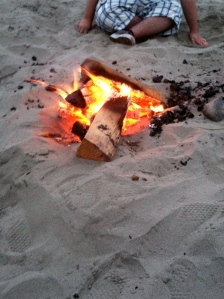 2. Fire on the Beach

I’m sure many people have done this, but as I never have until this last trip, I figured it was worth mentioning. Fires on the beach are wonderful, peaceful and romantic. This was probably one of the most memorable parts of the trip, and a part that many day-trippers miss out on. The effort of lugging wood to the beach (which you can buy pretty much everywhere in the summer) is well worth it. Make sure you bring your sweater and the s’mores stuff (and that the fire is out before you leave).

Though not on the ocean, a trip to Tillamook is always worthwhile. Take a self-guided tour of the cheese factory, sample some of the great cheese, and definitely get yourself a scoop of ice cream. 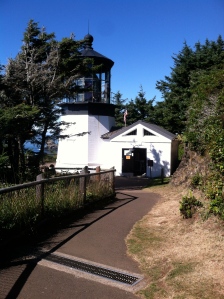 Cape Meares has the distinction of being the shortest lighthouse on the coast. You can go up into the lighthouse (check the lighthouse website for details) for no charge. It’s a gorgeous view, and it’s a great place to see wild birds (as Cape Meares is also a wildlife refuge). There are also lots of trails, and I imagine it would be a great place for a hike. 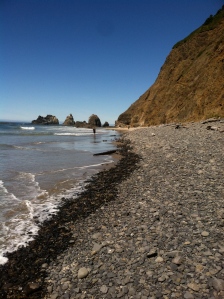 If you’re into rocks, agate hunting on the Oregon coast is a great way to pass a few hours. Different beaches have different rocks, and the best time to go is in January and February when a lot of the sand is gone and the revealed rocks are bigger. But you can still find small rocks in the late summer and one of the best places to do this is Oceanside. Aside from being a lovely, quiet beach, Oceanside is a treasure trove for rock hunters. Go through the tunnel (be sure to check tide information; you don’t want to go through at high tide) for the rockier side of the beach.

The Yankee Trader is in Gearhart, near Seaside, and if you’re driving between Seaside and Astoria, you really should stop in–it’s right on the highway. This wonderful store is deserving of its own post (which it will get). It is a sort of fantasy land of antiques arranged in the most marvelous ways–I’ve never seen an antique store so well curated and styled. It’s whimsical and forces you to look closer.

And those are my top picks for the northern section of the Oregon Coast. Did I miss your favorite thing to do at the beach? Have you been to any of these places? Let me know in the comments.

One thought on “My Top Five: the Northern Oregon Coast”

Kevin and I had a cinnamon roll bake-with-me session to celebrate him passing his IT certification. Way to go Kevin! I’m so proud to be your sister! And I’m also very excited to eat a cinnamon roll now 😉
I’m done with my masters degree! It’s been a crazy two years learning the ins and outs of libraries and archives and the study of the information that enriches, inspires, and helps us make decisions. I didn’t get to celebrate graduation in person, but I still wanted to decorate a graduation cap so I made this little one out of paper. Congrats to all the 2021 graduates out there!
You know it’s not going to be a productive day when it occurs to you that the most important thing you could be doing is sharpening all your pencils and subsequently taking pictures of the curly shavings...
Look who showed up in my cappuccino this morning!
A lazy Sunday with tea, cherry plums, and historical fiction.
There’s something delightful about drinking tea out of a tea cup and not a mug. I should bring these down out of the cupboard more often.
Loading Comments...
%d bloggers like this: