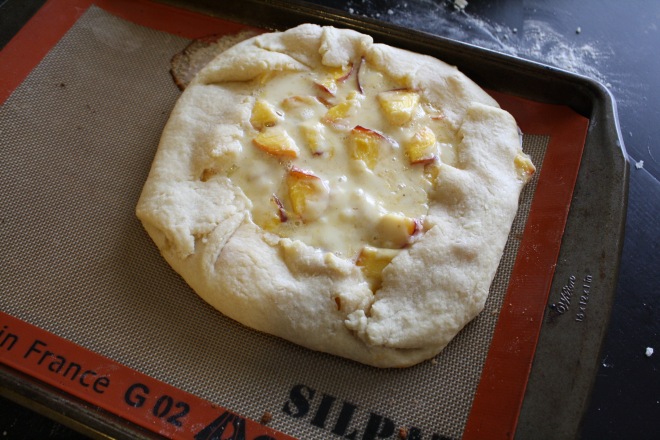 Frances Mayes’ memoir takes the reader on a culinary journey. So much so in fact, that she includes dozens of recipes within the book. Here is one of them, which celebrates two of my favorite things: dessert and fruit (and thus it should be no surprise that tarts are some of my favorite dishes)

The tart is only mentioned with the peach tart, so I will just include her commentary on the recipe:

“I learned to make folded pie crusts from a Paul Wolfert cookbook. On a cookie sheet, you spread the crust, pile the filling in the middle, then loosely fold the edges toward the center, forming a rustic tart with a spontaneous look. The peaches here–both the yellow and the white varieties–are so luscious that eating one should be a private act.”      137

The food in this book is inextricably intwined into the setting. Each informs the other and the food brings the magical place in Tuscany into reality. 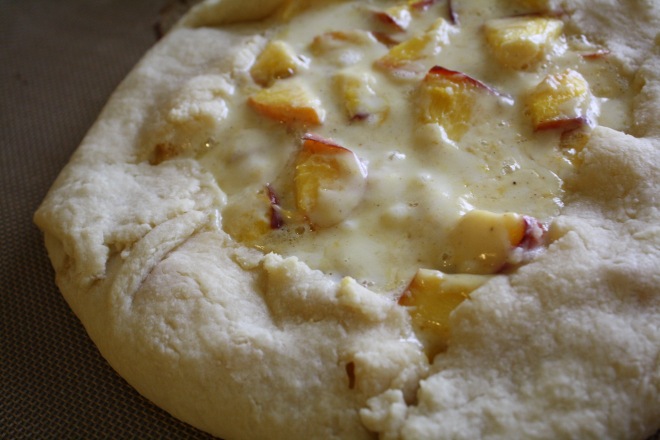 First, you need a crust. You can use your favorite pie/tart crust for this recipe. This is my favorite sweet tart crust (from Williams & Sonoma’s The Weeknight Cook). The easiest way to make this crust is in a food processor, but you can also use a pastry blender or even your hands.

Combine flour, sugar, and butter until they resemble fine crumbs. Add water and blend until the mixture just comes together.

Turn dough out onto lightly floured surface. Press into 3 disks and wrap in plastic wrap. You can keep the other two in the fridge for a few days, or you can put them in the freezer for a month. Refrigerate the one you’re going to use for at least 30 minutes before rolling.

Roll out your crust to slightly larger than pie size. Lay on a baking tray.

Combine the filling mixture of mascarpone, sugar, vanilla, and spice. Mix peaches in and spoon into the center of the crust.

Fold the crust around the filling, leaving a four-five inch hole in the middle.

Peaches always make me think of summer. What’s your favorite summer fruit? Let me know in the comments.

3 thoughts on “Baking for Bookworms: Folded Peach Tart from Under the Tuscan Sun by Frances Mayes”