I couldn’t do a Harry Potter food marathon without including butterbeer, could I Butterbeer, which first appears in the third book is closely associated with the wizarding world, and Hogsmeade in particular. After it makes its debut, you’ll find it everywhere in the wizarding world, from the Gryffindor tower to Sirius’ house. Its first appearance in the book emphasizes the fact that Harry is not allowed into Hogsmeade, and therefore not allowed to partake in the beverage–it’s a sign of how excluded he feels from the outing Hermione and Ron went on without him. As Harry sneaks into Hogsmeade and the book develops, butterbeer becomes another kind of marker–it shows the characters coming of age and has associations with comfort and belonging. It’s probably one of the most tangible things young people who wish they’d gotten their Hogwarts letter feel excluded over. But not to worry! For food has a magic all its own and one that anyone can master. 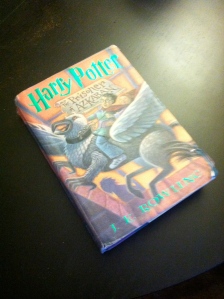 The first time Harry tries butterbeer occurs when he sneaks into Hogsmeade:

“That’s Madam Rosmerta,” said Ron. “I’ll get the drinks, shall I?” he added, going slightly red.

Harry and Hermione made their way to the back of the room, where there was a small, vacant table between the window and a handsome Christmas tree, which stood next to the fireplace. Ron came back five minutes later, carrying three foaming tankards of hot butterbeer.

When you think of food from Harry Potter, I guarantee butterbeer is at the top of the list. A mixture of butterscotch, butter, and carbonation, butterbeer can be served hot or cold or right out of the bottle. There are dozens of variations of this recipe, but very few came close to what I believed to be an authentic taste. First of all, very few butterbeer recipes have alcohol in them. While the alcohol content in the beloved beverage is low, it’s enough to get Winky sloshed on a regular basis. My perfect butterbeer recipe would have to include alcohol then. It  also needed some fizz. A lot of butterbeer recipes are more like butterscotch flavored lattes, and though delicious cannot be considered a carbonated beverage like actual beer. And still, my recipe had to have that buttery delicious flavor that is associated with butterbeer. However, I recognize that not everyone wants alcohol in their butterbeer, and so at the bottom I’ve concocted a delicious butterbeer recipe that everyone can enjoy. 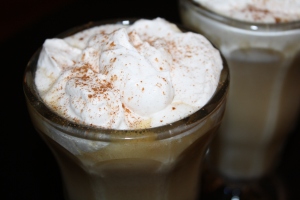 Both recipes adapted from Hans Haupt. For the first recipe I’ve preserved the ml measurements over cups because I think it’s just as simple and makes it easier to see the ratios. This makes one mug, but can easily be doubled or increased more to fit your needs.

This non-alcoholic version doesn’t have quite as much depth as its alcoholic counterpart, but it’s quite yummy nonetheless. I had to tweak this recipe a lot until I produced something I was satisfied with, but I think it was definitely worth the effort.

I made this butterbeer a cold drink because there are so many recipes for warm ones. If you’d rather have this drink warm, you can heat everything up for a minute or two in the microwave before you add the whipped cream, but it will be less fizzy. You can make this more of a milkshake by adding everything from the fourth step to a blender with a scoop of ice cream, a pinch more of cinnamon and nutmeg, and add the whipped cream to the top (maybe drizzle with caramel or butterscotch sauce?)

Will you give either of these recipes a try? Which calls to you more?