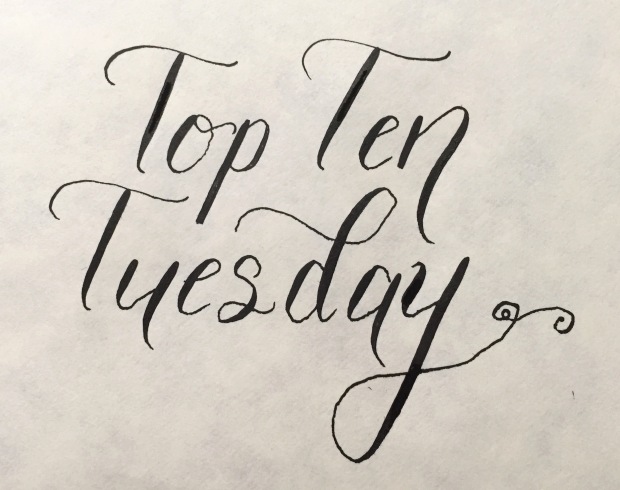 Top Ten Tuesday is a weekly feature brought to you by The Broke and the Bookish.

I hope you are feeling the love today. Valentine’s Day has never been a really big deal to me. My fiance and I tend to do little things. He usually picks up flowers for me, usually some colorful daisies or pretty mums–something cheery–several days early so that I can enjoy them for a while. We like to go pick out chocolates at one of the places around town. Here in Boise our favorite spot to do that is Chocolat Bar, which makes the most amazing truffles. We also cook dinner together. It’s very mellow. Let me know if you have special plans for today in the comments!

Today’s topic is all about romance. So I thought I would share some of my favorite couples with you from literature and film. Here they are:

Why they’re great: Knightley calls Emma out when she’s behaving selfishly and forces her to acknowledge what she’s doing. He’s also quick to praise when he approves, and he’s always acting on behalf of others. Emma meanwhile never just accepts Knightley’s opinions at face value and challenges him. This is a couple that will challenge each other to do good for other people. They have good communication established, and their relationship is founded on friendship and mutual respect.

Why they’re great: What makes Ron and Hermione good people is what helps to make them a good couple. Ron is loyal, brave, and true, while Hermione is strong, idealistic, and clever. Together they challenge each other. Ron tries to get Hermione to think outside the box and she helps bring him down to earth again. Even though they argue, their relationship is ultimately based on years of friendship that have been strengthened through the trials they’ve gone through together.

Why they’re great: Arthur and Molly may not have much money, but that hasn’t interfered all that much with their relationship. Each is always concerned with the other’s welfare and takes their thoughts and feelings to heart. They don’t always agree or always understand each other’s position, but they are a united team.

Why they’re great: It takes them a while to figure out they’re the perfect couple, but it’s obvious to everyone else. No one can keep up with their wit and intelligence; they’re the best sparring partners. They keep each other on their toes. And in the end, Benedict is able to go beyond talking about his feelings and proves his love, challenging his dearest friend to a duel.

Why they’re great: Roxanne longs to hear beautiful words and Cyrano longs to tell her them. Though I have to admit the fact that they’re cousins kind of weirds me out, their devotion and intelligence carries them through. The ending is tragic, but it’s so poignant.

Why they’re great: They’re sometimes at cross purposes, but you know they’re going to get together, which means plenty of dancing and singing. I don’t know of a more wonderful couple than Fred and Ginger in whatever movie they did together. Astaire is full of grace and Rogers is full of fun and together they are amazing.

*I do think that as much as I really like this film I find the “bojangles” scene really racist and disturbing, and I think that’s really important to acknowledge. Even though it was the 1930s, and times were “different,” the caricature is prejudiced and unnecessary.*

Why they’re great: True love. Love deep enough and true enough to never be stopped by anything–not death, not distance, not time, not kings and queens and princes. Nothing.

Why they’re great: They’re relationship turns traditional gender roles on their head. Hawkins minds the child, the future King of England, and the Captain is off rallying new recruits, training, and leading them. She’s sharp and warm, he’s eager and funny. Together they show huge amounts of bravery and devotion, both to each other and their cause.

Why they’re great: It may have started off in desperation (Lockwood fleeing from his over-eager fans), but it ends in love. Cathy’s talent, beauty, charisma, and good nature can’t help but win Don over and I think the same qualities are what let her put down her walls and fall for him.

Why they’re great: Both of them are strong characters in their own right, and together they make a pretty impressive pair. These rebels are meant to be together.

5 thoughts on “Top Ten Tuesday: 10 of My Favorite Fictional Couples From Literature and Film”

You know it’s not going to be a productive day when it occurs to you that the most important thing you could be doing is sharpening all your pencils and subsequently taking pictures of the curly shavings...
Look who showed up in my cappuccino this morning!
A lazy Sunday with tea, cherry plums, and historical fiction.
There’s something delightful about drinking tea out of a tea cup and not a mug. I should bring these down out of the cupboard more often.
Today was a cinnamon roll kind of day...
We drove up to Muir Woods today and spent the morning among the redwoods.
Loading Comments...
Comment
×
<span>%d</span> bloggers like this: