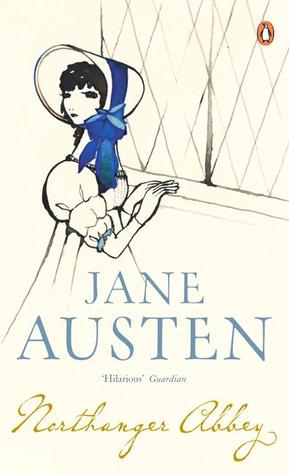 Hamlette is hosting a Jane Austen week, where lots of bloggers are posting on one of our favorite authors. There are discussions of her books and the various adaptations they’ve spawned in film and further. You can find all of the other posts here!

I chose to write about Northanger Abbey, one of the more overlooked Jane Austen books. It’s quite different in tone from Pride & Prejudice, Emma, or Sense & Sensibility. The heroine is a bit more naive, easily excited and frightened, and in the end learns that life isn’t like the Gothic novels she loves to read. It’s still social commentary, but in a very different way. Instead of being a novel of manners and conversation, it tends towards the meta-fictional; it’s a discussion about the nature of writing itself and how the novel and its author fit into the shape of the culture.

Northanger Abbey was the first book Jane Austen completed for publication, but it was not actually published until after she died. She sold the manuscript under a different title to the London bookseller Crosby & Co. They never published it, and eventually sold it back to Jane Austen’s brother. She ended up changing the main character’s name from Susan to Catherine and did some more revision, but ultimately it wasn’t published until six months after her death in 1817.

The story is a fairly simple one. Catherine is invited to stay in Bath with some friends of the family. While she is there she makes some friends, and is ultimately invited to Northanger in the days when “visits” lasted for weeks on end. She has a few anti-climatic adventures, and then is asked to leave, but this is Jane Austen so in the end everyone ends up happily.

At its core, Northanger Abbey is a satire of and confrontation with the popular Gothic novel. These novels, which had very little in them except for the macabre and the sensational, were designed to thrill and titillate. Jane Austen, through this work and her others, sees literature fulfilling a different purpose–that of entertainment and instruction. This goes against the more “serious” writing at the time, which suggested that anything written for entertainment at all was not worth the  paper it was written on and was meant for less serious people. In other words, it was meant for women. Austen pushes back against this idea to straddle the line between the two extremes, and by doing so makes her own monumental contribution to literature.

It’s also a novel about a women who learns how to read, not just the books that she so fancies, but the world around her as well. She has to see through what people say and learn to read their motivations.  It’s about a young woman learning that life isn’t as lurid as books would suggest, and that the truth or core of something is usually more mundane than it looks as well as much less good-natured. Austen suggests that this is a good thing–imagination has its place but being realistic means that you won’t be taken advantage of. This is pure speculation on my part, but I suspect that this is a lesson Austen herself had to learn as a writer and a young woman. The fact that this novel was ready for publication first suggests that it might be something of a manifesto for what Austen would attempt to do as a writer in the future.

Catherine Morland is not exactly the picture of a Gothic heroine, which Jane Austen makes clear from the opening sentence, “No one who had ever seen Catherine Morland in her infancy would have supposed her to be born an heroine.” She is missing some of the more essential attributes, namely a dark and dismal past (her family being squarely middle class and still living and her childhood pleasant), a beautiful face (hers is only so-so), and intuition or a sense of fate. In short, she’s exactly the kind of girl who might be fascinated by Gothic novels because they represent the exotic and adventure. As Mr. Tilney tells her, she’s more likely to judge people based on her own good intentions and positive motivations, leaving her unable to understand or sniff out malice or even a lack of candor.

Mr. Tilney is an interesting character who is quite clever and observant. He’s not my favorite Austen leading man because his relationship with Catherine never feels quite as equal as Emma’s and Knightley’s for example or Lizzie’s and Darcy’s. However, he does his best to try and teach Catherine about herself and the world.

Northanger Abbey itself is a particularly intriguing setting for Austen. She often uses great houses as her settings (all of her heroines, no matter their sometimes precarious financial circumstances, live in what I would term a large house and have plenty of servants), but very few of them have the kind of historical weight or Gothic atmosphere that the Abbey does. But Austen does not allow the reader to bask in the romance of the setting, instead she focuses on the prosaic details. Even if Catherine doesn’t realize it at first, Northanger is nothing more than a big house, and is nothing to be in awe of or swoon over.

Catherine Morland wants to find adventures, and surely there is no better way to do so than uncovering secret letters and ancient mysteries. She’s caught spying around the house, of course, invading Mr. Tilney’s deceased mother’s rooms, but the most iconic episode of the book is her discovery of the lists. Catherine gets herself in a tizzy one stormy night and her eyes fall on a cabinet. She simply has to explore it, and she does while the wind howls. Conveniently, the key is in the cabinet, though it takes her several attempts to open the door. She searches every cranny (leaving the locked middle drawer for last)–remembering to check for false bottoms. Then she opens the last drawer and there at the back is a rolled up piece of paper. Before she can read a single word, her candle is promptly extinguished by the wind and she hops into bed, dropping the papers to the floor in her fright. She reads it in the morning, sure that it will contain all kinds of hidden secrets, and find that it contains…a few bills for the laundry and farrier. No episode could more clearly illustrate Austen’s feelings about Gothic novels. After being so scared, after building the episode in her mind up so much, there was nothing there but the trappings of economic privilege.

While Northanger Abbey is not my favorite Jane Austen novel, I think it’s a great one–especially to learn about Austen’s place in the literature of the era and to understand her opinions on novels. Although she’s often lumped together with the Bronte sisters, her goals in writing were very different. She presents herself in this first offering as a witty and independent mind whose goal is to reflect society back to itself, showing how the world has shaped the lives of the women living in it. Catherine may be one of her sillier protagonists, but she still shows the pressures of growing up into womanhood. If you haven’t read this one before, or you haven’t read it in a while, it may be time to pick this book up.