It may come as a surprise to people that I’ve never had rice pudding. I’m not really sure why except that no one in my family ever made it and my resistance to anything that seemed like tapioca has prevented me from trying it. But I’m 22. I’ve grown as a person. And while you still can’t get me to eat tapioca (not that anyone’s offering), that doesn’t mean I don’t try new things on a regular basis.

Another character who’s resistant at first to trying new things is Tristan Thorn from the book Stardust (as a side note: this book is an excellent adult fairy tale, and the film adaptation is quite good. It’s lighthearted and a good beach or vacation read that you don’t have to mind being caught dead with. Not that you want to be caught dead with any reading material–that is, you don’t want to be caught dead. Or die at all, probably. I’ll stop now.) As he goes on his adventures, food becomes more about sustenance, and though he takes pleasure in many of the things he eats, the food doesn’t play a very substantial role.

However, the rice pudding is interesting, partially because we get an ingredient list for the pudding, and partially because it’s used to illustrate small differences between Victoria (his would-be love) and Tristan. It also shows how small disputes about food become subjects of interest between people and can serve to sever connections as well as bring people together. There are “right” and “wrong” foods for certain occasions, or they have to be prepared a certain way. There are guidelines and taboos that surround food, and Tristan’s family does not follow the established patterns of behavior (or at least that is the line of reasoning taken by the villagers). 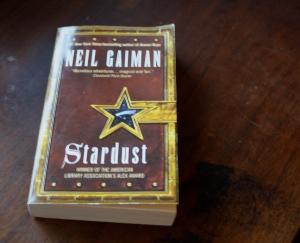 This passage comes at the beginning of the book, before Tristan goes on his quest. He works as a shop assistant and is helping Victoria with her shopping:

“Tristan read [the list] to himself, looking for something about which he could begin to talk: a conversational gambit of some kind–any kind.

And then she smiled at him, and said, ‘Mother says that rice pudding in sufficient quantity will help to stave off chills and colds and other autumnal ailments.’

‘My mother,’ Tristan confessed, ‘has always sworn by tapioca pudding.’

Poor Tristan. Health tonics, even the delicious pudding-y sort, are not a very romantic topic of conversation. However, just because it’s not the most romantic dessert, rice pudding is a lovely dish to make for people you care about. And, you can also use up more of that golden syrup you made, so that’s a win.

recipe adapted from The Pioneer Woman

You could technically get away with not making the sauce, but you would definitely regret it. It is a beautiful, beautiful thing. Therefore, I must insist that you not deny yourself.

Soak the raisins in the whiskey for one hour. Meanwhile, do some yoga, catch up on your reading or Netflix queue, give your dog a bath, whatever.

In a small non-stick pot (if you’ve got one it’ll be a life saver) or large non-stick sauce pan, combine the rice, water, milk, cream, butter, and salt. Turn the heat to medium and cook until the mixture starts to gently boil.

Cover and turn the heat down to low. Simmer for 20-25 minutes, stirring twice. If the mixture is absorbing the liquid too quickly, you can stop the process at around 18-20 minutes. Basically you want the rice to be fully cooked, but still have some liquid to work with.

While you’re cooking the rice, make the caramel pecan sauce. Put all the ingredients in a pan over medium-low heat (I used the same whiskey from the raisins in the sauce) and let it bubble gently for about five minutes until it thickens. Take off heat and set aside to cool.

Once the rice is cooked, take it off the heat and add in the sweetened condensed milk, spices, and vanilla. Put back on the burner for 5 minutes to finish cooking.

Now take it off the burner again and add your beaten egg, very slowly so that it doesn’t scramble. The heat of the pudding will cook the egg, and it will thicken everything up. Then, stir in your raisins.

Serve it hot in small bowls with some caramel sauce on top.

If your rice hasn’t really thickened up at all by the time you add the sweetened condensed milk, don’t worry. Uncover the pot, turn the heat up a smidgen, and cook until it reaches the right consistency.

If you overcook your caramel sauce and it gets solid as it cools just throw the whole thing in a microwave safe container, microwave it until it’s hot (about 20 seconds) and then add about a tablespoon of water and a tablespoon of golden syrup or corn syrup.

If your caramel sauce didn’t cook enough, just throw it in the microwave for 30 second intervals, stirring until it becomes the right consistency.

Is there a dish you’ve tried recently? Let me know what it was–and if you liked it–in the comments.