It’s good to be blogging again after our three week trip to Taiwan. I have several posts in the works about that trip, but today I want to write about a really great article I read today on Lit Hub with the rather long title: “How Should a Literary Adaptation Be? We Asked the Critics for the Answer” by Kristen Evans.

I’ve talked a bunch on this blog about adaptation, but I have stressed in my posts that I don’t like to just spend time talking about what makes an adaptation good or bad, and instead I tend to focus on what is being done differently that I find interesting or notable and what is being done well.

On the whole I’ve stayed away from the question of good or bad because I’ve always felt that people’s opinions were mainly drawn from one issue, which is how faithful an adaptation is to its source material. Some people take this to mean whether you can match a movie to its source character for character and plot point for plot point, and some people take this more loosely. In the words of the critic Matt Zoller Seitz “It’s like, did you get the book, or did you not get the book?” Getting the book meaning do you understand the meaning behind the words, the “point,” the atmosphere, etc.

The article mentions this viewpoint, which is a sound one. But then it goes on to have a very interesting conversation about what visual mediums add (namely world building on a sometimes epic scale a la Game of Thrones) and how they struggle with how to portray interiority.

It also talks about the need to look at a visual medium in context–how it responds/fits into the larger cultural conversation, and the need to look at it according to its own merits (aka how does it function as a show independent of its source material).

I found this conversation around what makes for good criticism and good adaptation to be fascinating. I lean towards looking at adaptations in conversation with themselves and with culture in general, but I also think that a good adaptation should “get” its source material. Meaning that the original author if he or she was to see their work produced should be able to respect the artist’s vision of their story, even though it might be quite far from a work that they would produce themselves. 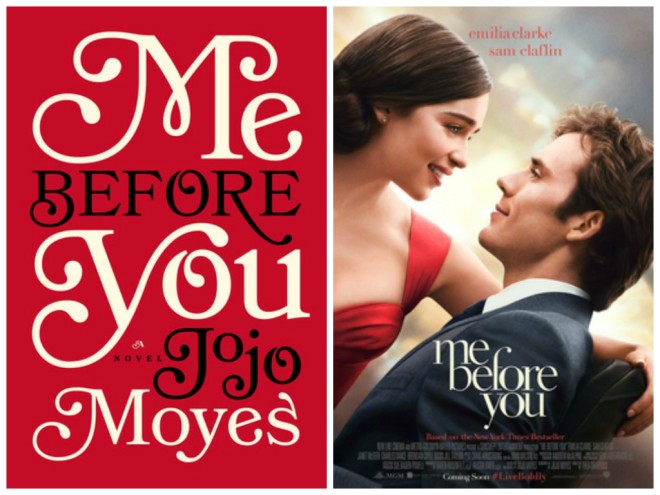 Film Adaptation–love it or hate it, it’s an undeniable part of our culture.

For my part, I love it. Even when it’s done poorly (and goodness knows it is), it still has the power to get people talking critically about art and adaptation.

The film version of Me Before You is actually really close to its source material. Part of this is due to the fact that the author had a pretty big hand in writing the screenplay, but that’s still not always the case. Joan Didion wrote a screenplay version of her book and still felt that film did not really capture the original.

However, unlike Joan Didion’s work, I think Me Before You is much more visual and externally focused. In that way, the book can sort of come to life. The setting near the castle helps to anchor the story, while Louisa Clark’s costumes help to bring her character to life for us. They mark her as more complicated than she appears to be.

Though I think that the film for the most part really captures its source material, there are a few interesting parts of the book that are left out of the film, and I thought I’d look at a few of those and discuss the choices.

There are a few spoilers here (from the book), so if you want to be surprised by them please stop reading.

Most of the characters in the book make it into the film, but the character we don’t get to see is Will’s sister. In the book she is very angry with her brother and with her parents for honoring Will’s decision. She isn’t in the book very much, and honestly the decision to omit her makes sense–she doesn’t really add anything.

The difference in Mr. Traynor’s character however, is a little more interesting. Will’s father definitely comes off as aloof in the film, but most of this we put down to his “Englishness.” He tries to be there for his son and respect his wishes. The relationship between him and Mrs. Traynor seems to be fairly solid, despite the emotional stress they’re under. In the book however, we see two people who were on the brink of divorce sticking it out for their son as well as the sake of appearances. Mr. Traynor is clearly unfaithful to his wife, and is often absent at crucial times.

The character’s change in the movie makes him seem far more rational and more of the concerned parent, but it also makes him way less complicated.

By far the largest omission in the book concerns the main character. We learn that the real reason for Louisa’s life choices is not that she has felt obligated to her parents, although she does, or that she’s willing to settle for less. Instead, Clark has been a survivor of sexual assault and she’s leading a very safe life because it’s the only way she can feel secure again. Will helps her to work through that.

I think maybe this was omitted because it’s one more heavy thing to deal with in a film that’s already pretty emotional, but in the light of the #metoo movement, the omission feels a little glaring. Why deny Lou’s complicated past?

What did you think of Me Before You? Have you read the book or seen the film or both? Let me know in the comments! 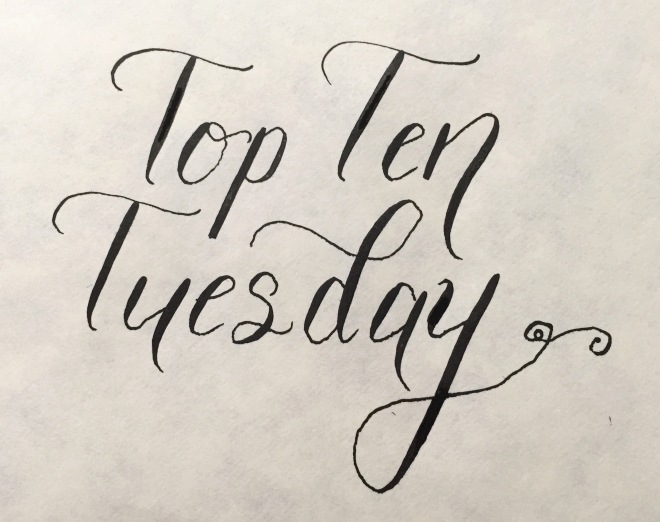 Top Ten Tuesday is a weekly feature from the Broke and the Bookish.

Okay so I’m not very good at keeping up with the kinds of things that are being made into movies. I usually don’t know what’s playing unless I’m looking at a showtime schedule, and even then my favorite theater right now plays older movies and has cheaper tickets (as in date night with popcorn and a drink for less than $20, even in 3D). So I usually have no idea what’s going to be coming out. Unless someone tells me. Or a random trailer ad preview plays on YouTube (why are the ones I get always horror movies?!?). Or it’s something too exciting to miss. Like Star Wars (which I am super pumped for, by the way. Any other Star Wars fans out there?)

So I had to do actual research for this post. And here’s what I came up with. Some of the other movies I’ll probably see and they seem like fun, but I tried to pick mostly the ones where I’d already read the book…which didn’t work too well since I feel like I haven’t read any of these, or if I have, I’m not particularly excited for the movie. Since I’m not up to date on my movies, some of these are 2015 releases. You can let me know if the movies were any good.

The Price of Salt by Patricia Highsmith: Remember what I said about things set in the 1950s? Glad we’re all on the same page. But I haven’t read this one either.

A Book of Common Prayer by Joan Didion: I feel very attached to Didion, since I spent an entire term just studying her work. And I think Christina Hendricks is perfect for this role.

The BFG by Roald Dahl: I read pretty much read all of his books as a kid. Matilda and I are soul sisters. This book is a little less well known, but still super good. And now it’s going to be a movie with Bill Hader, whom I love. So lots of love going on.

Fantastic Beasts and Where to Find Them by JK Rowling: Even quasi related to the HP series? Um… yeah I’m watching it.

The Silver Chair by CS Lewis: So I wasn’t all that enamored with the recent-ish Chronicles movies. But maybe this one will be the one? I’m hopeful.

Allegiant Part I & II by Veronica Roth: This is kind of a cheat because I haven’t actually read these books, but I liked the first two films a lot and want to finish the series. Who knows, I might even read the books.

The book I really want to them to make the movie of and which is already optioned, so it basically fits the criteria:

The Night Circus by Erin Morgenstern: Please, please, please make this movie so that all my bookish dreams can come true!

Did any of these movies make your list? What upcoming film are you most excited for?